A journey to discover two jewels of Abruzzo’s winemaking. From a quiet past to the development of the outstanding potential of two iconic white wines, both destined to go a long, long way.

Abruzzo is one of Italy’s most interesting wine regions in terms of variety, biodiversity and quality. Often considered the home of important, full-bodied reds (you only have to mention Abruzzo and Montepulciano springs immediately to mind), in the last couple of decades it has succeeded in expressing excellent potential in its white wines too.

Having archived the recent past, during which the quest for profit prioritised quantity over quality, the region has turned over a new leaf with praiseworthy initiatives aimed at enhancing the value of native varieties that had almost disappeared because they were considered unprofitable. These grapes are now receiving critical and public acclaim for their excellent sensory characteristics and flavour.

The ideal position between the Adriatic Sea and the Gran Sasso and Majella mountains makes this area perfect for viticulture. Extensive temperature ranges between day and night, just the right amount of precipitation and constant breezes form the perfect microclimate for the vine. An important winemaking tradition rooted in antiquity, at the time of the Greeks and Phoenicians, who first introduced the cultivation of vines to the soils of Abruzzo, has been successfully grafted onto this fertile humus.

Today, two native white grape varieties, Pecorino and Passerina, are enjoying a moment of extraordinary revival. Their curious names have definitely contributed to their relaunch, but their renewed popularity is largely due to a determined and far-sighted generation of winemakers and wine entrepreneurs who decided to gamble on their success back in the 1980s.
While these grapes were usually blended with each other or with Trebbiano in the past, it is only recently that the decision to vinify them in purity has been made in order to enhance their distinctive qualities. Let’s explore their origins, characteristics and curiosities together.

A grape variety of ancient origin, planted in Central Italy by the Greeks, Pecorino first found the ideal conditions to thrive in the Marche and then in Abruzzo.

Early ripening and low yields seriously endangered this variety, which was threatened by extinction at the end of the last century. Used exclusively in blends with lighter wines and relegated to a supporting role, it was only in the 1990s that it was resurrected to new life, thanks to the decision to vinify it as a single-grape wine.

Character, intensity and freshness are its distinguishing features. Its considerable structure is mitigated by mineral and herbaceous notes, with a delicate spiciness and suggestions ranging from exotic fruit to yellow flowers.

Excellent persistence on the palate makes it comparable to a red wine; moreover, thanks to its balanced taste and marked acidity, it is extremely versatile when it comes to pairing with food, so much so that it can accompany an entire meal. Perfect with antipasti, fish crudités and fish soups, it also goes well with fresh cheeses, white meats and structured rice and pasta dishes with black truffles and mushrooms.

But what is the origin of such an intriguing name? According to the most widely accepted theory, it can be traced back to the practice of herding and transhumance, which were widespread in Abruzzo. Apparently, the sheep were particularly fond of its sweet berries, which ripened early in September, just as they were being driven from the mountains to the coast. 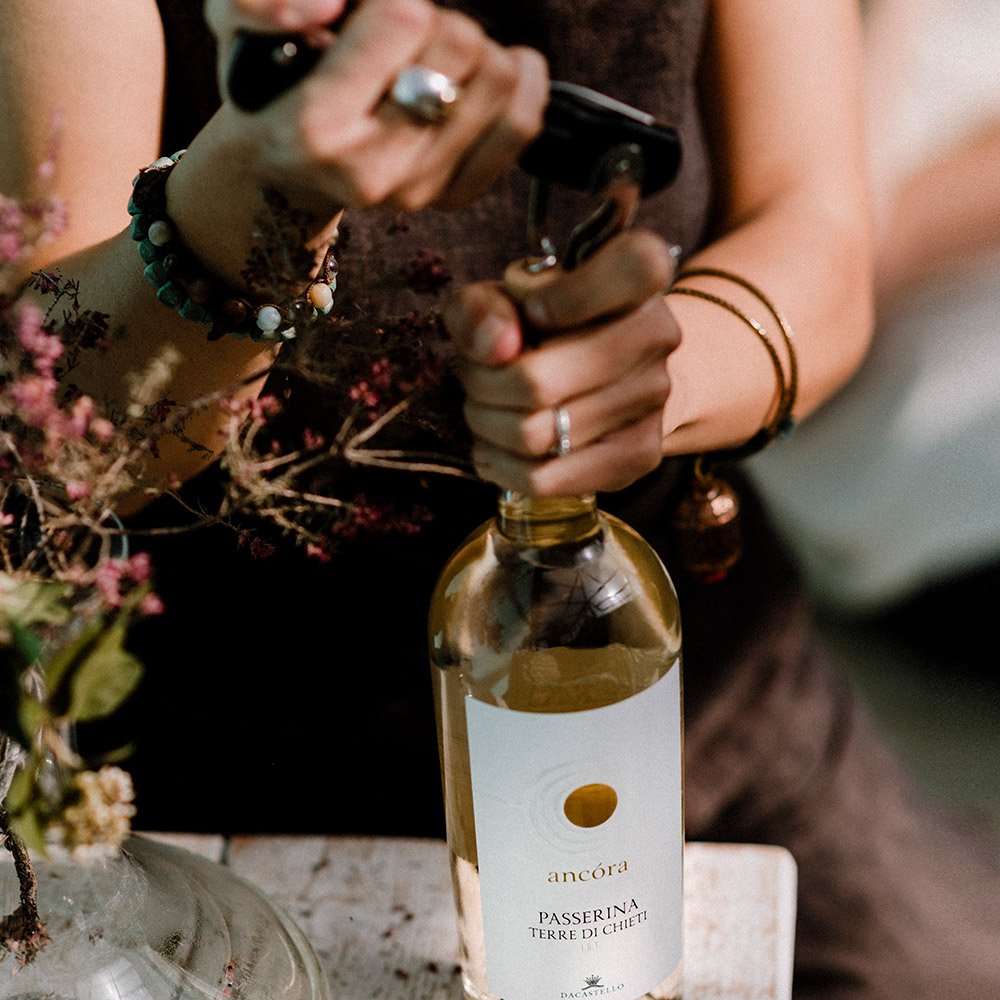 Passerina is one of the most popular white wines from the Adriatic coast. A member of the Trebbiano family, this ancient grape variety enjoys the favourable influence of sea breezes, which give it its characteristic savouriness.

It shares a less-than-glorious history with Pecorino. In the past, it was mainly vinified in blends, in which this grape was used to convey elegance, and it lived in the shadow of the more resistant and higher-yielding Trebbiano Toscano for a long time. Today, fortunately, many winegrowers have chosen to vinify Passerina as a single-grape wine, bringing out its distinct aromatic qualities.

A fresh, not very structured wine, it reveals fruity notes, supported by a delicious savoury flavour: pineapple, citrus fruits, white flowers and peach make up the varied bouquet. Passerina is extremely versatile, suitable for vinification as a still or sparkling wine or in an elegant raisin wine version, where it expresses interesting caramel and candied scents. In the still version, great acidity, a light body and intense aromas make it ideal as an aperitif or in pairings with fish dishes, vegetables and spicy recipes.

Not an overly demanding wine, but rich in appeal and pleasantness.

To end with a little piece of trivia: its name is said to originate from the particular fondness of sparrows (“passeri” in Italian) for its sweet, fleshy berries.