Wines from South Tyrol: a mosaic of excellence

Let explore the wines of South Tyrol together. Rich in character and steeped in history, they have rightly earned the respect of connoisseurs in recent years.

The Alps and the Mediterranean come together in the glass

South Tyrol is one of Italy’s smallest wine-producing areas, but without doubt one of the most varied. The mild Alpine-continental climate with more than 300 days of sunshine a year, the right amount of rainfall, an extraordinary variety of terroirs, and the experience and passion of the winegrowers are the ingredients that make this part of Italy so rich in resources and biodiversity.

The Alpine chain protects the region from northern currents, leaving room for the warm, humid winds that blow in from Lake Garda and the Mediterranean. This has created the ideal climatic conditions for a multi-faceted viticulture, with an extraordinary range of red and white wines, made from both native and international grapes.

The variety of the landscape, the unique geological characteristics and the extreme variability of the soil composition within the space of just a few hundred metres contribute to making South Tyrolean wines unique and recognisable on the Italian wine scene.

Thanks to the varied microclimate, it is easy to imagine the potential of these areas: grapes such as Pinot Blanc, Sauvignon Blanc and Pinot Noir grow at medium-high altitudes, while later-ripening varieties such as Lagrein, Merlot and Cabernet grow at lower altitudes. Each grape variety has found its home in the most suitable areas in terms of altitude, exposure, soil and climate: this is naturally reflected in their optimal sensory and qualitative expression.

South Tyrol has two indigenous grape varieties: Lagrein and Schiava. A multitude of international varieties, both red and white, have also found fertile ground here: Bordeaux grapes such as Cabernet, Merlot and Sauvignon, as well as those originally from Burgundy (Pinot) and the Rhine (Riesling, Sylvaner and aromatic Traminer).

The pioneer of this revolution was Archduke Johann of Austria. At the beginning of the 19th century, this wine-loving aristocrat decided to plant new varieties such as Riesling and the grapes of Burgundy in the region, laying the foundations for the varied constellation of wines that still characterises South Tyrol today.

The opening up of new communication routes and the gradual refinement of vinification techniques are the two other key factors that have contributed to the growth of South Tyrolean viticulture.

The prerequisites for the constant evolution of quality were created in the 1980s, thanks to the development of the crus, the reduction of yields and the implementation of state-of-the-art technologies. The fruit of this commitment is sealed by the fact that South Tyrol is the Italian region with the largest vineyard area cultivated area under the regulations for D.O.C. wines.

Today, South Tyrolean whites rank among the top Italian wines of excellence, appreciated by critics for their intense mineral notes, generous acidity and crispness and the depth of their bouquet. The international red grape varieties which are now perfectly established in the region produce wines with character, tannin-rich but elegant, with very interesting results, both in the lighter, fruitier types and in the more structured, full-bodied wines that are becoming increasingly popular on international markets.

Our Le Clivie collection is completed by three new wines in absolute harmony with the territory and the South Tyrolean wine tradition.

The Törggelen range (named after the Latin word for the grape press) pays tribute to the grape pressing celebrations, an old country custom celebrated today in the region’s cellars and inns.

The origin of this tradition is rooted in the festive gatherings that were held at the end of the grape harvest, organised by the farmers to taste the new wine together, warmed by the Stube, accompanied by singing and good food. Today, the ritual has “evolved”: from the beginning of October to the end of November, typical farmhouses and inns welcome visitors with the specialities of South Tyrolean cuisine: “Schlutzkrapfen”, canederli, speck, roast chestnuts and traditional sweets and cakes, accompanied by a glass of new wine. 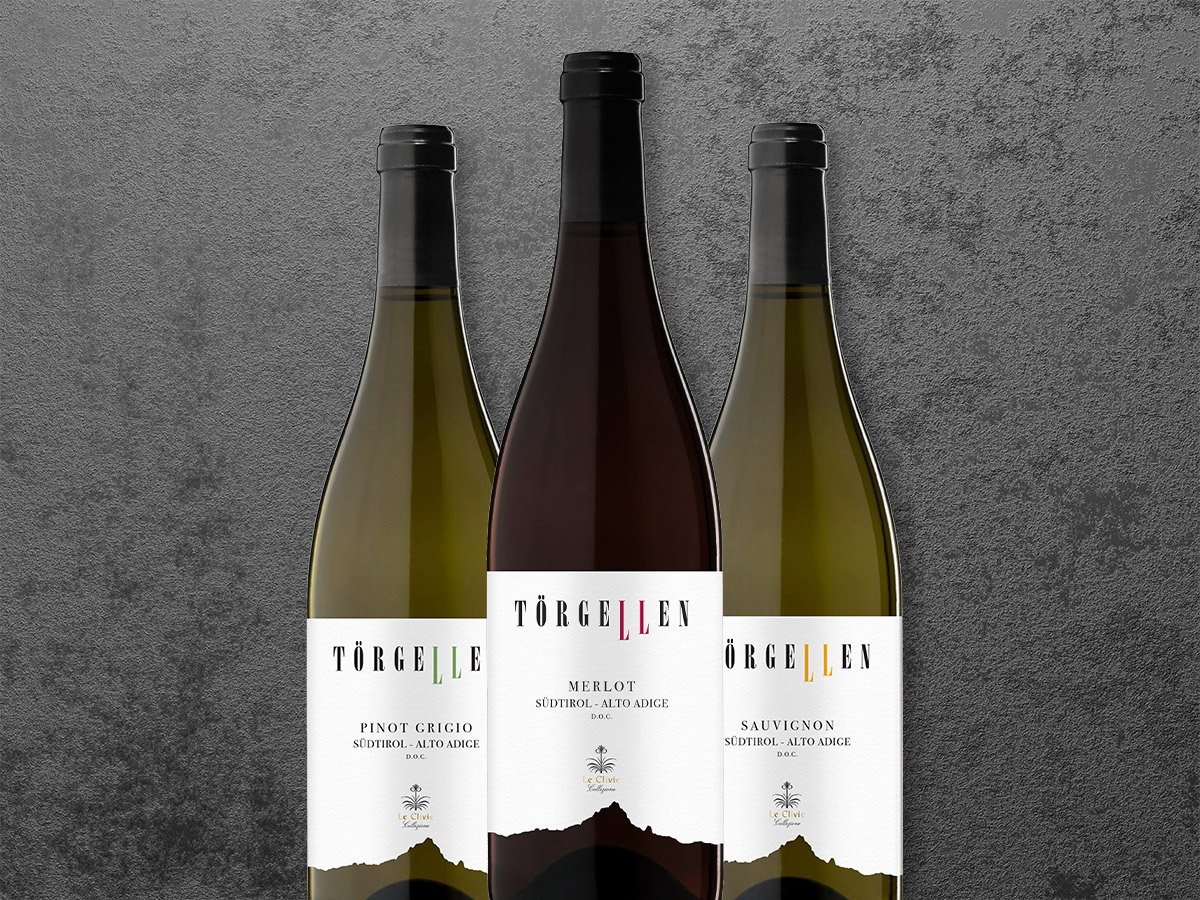 Elegant and pleasantly aromatic, characterised by a vegetal and herbaceous bouquet and tempered by the mineral nuance that the grape acquires in the South Tyrolean terroir. Perfect with vegetarian dishes, goat’s cheese and oily fish.

This wine originates in vineyards located at 400 metres above sea level, in alluvial soils with lots of detritus, right at the heart of the Wine Road. Crisp and fragrant, with evident notes of pear and apple. Ideal in combination with typical regional dishes, it also lends itself to unusual pairings with exotically inspired fish and shellfish dishes.

A smooth and harmonious wine with a distinctive aroma of wild cherries and redcurrants, making it the South Tyrolean fruity Bordeaux-style wine par excellence. Worth trying with game, goulash or Wiener Schnitzel. Also ideal with soups, canederli, risotto and mature cheeses.